Charlotte Hodge Thomas is a Fine Art painter, who lives and works on the Isle of Wight. Her art college training is as follows...

For almost a decade after graduating, Charlotte exhibited widely as a Textile Artist, creating unique embroidered wall-hangings and fabric art collages for public art commissions and private collections. She received prestigious awards from the Crafts Council of Great Britain, becoming a Selected Maker, and from the Prince’s Youth Business Trust. In 1997 a piece of her work was purchased for the Embroiderers Guild Permanent Museum Collection at Hampton Court Palace, where it is still housed.

Since 2001 Charlotte has focused on Fine Art painting, developing a bold, vivid style, capturing the essence of land and seascapes with acrylic on canvas. Her paintings marry sweeping backdrops of colour with intense attention to foreground detail. 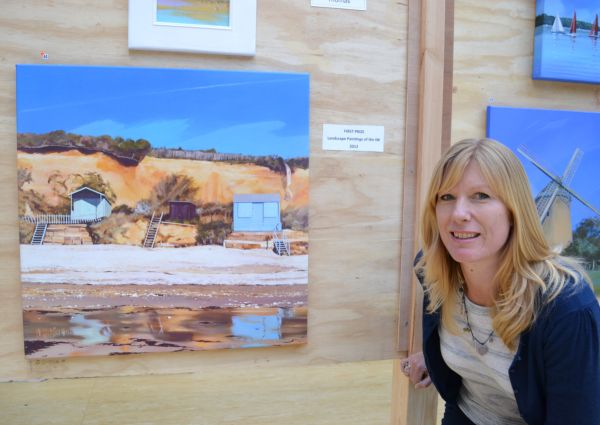 Charlotte paints mostly marine, coastal and landscape imagery. She exhibits her work regularly on the Island, including in the annual IW Open Studios, at Quarr Abbey Gallery and at Seaview Gallery.
In 2010 Charlotte received International recognition for her Fine Art painting when she became a finalist in the Aesthetica Creative Works Competition with her painting entitled 'Long Ledge Dawn'. In 2012 Charlotte won First Prize at the Landscapes of the Isle of Wight 28th Annual Exhibition, held at the Coach House, East Dene, Bonchurch, with her painting entitled 'Forelands Beach Huts'. In 2018 she won First Prize for a second time (at the 34th IW Landscapes exhibition) with her painting entitled 'Ducie Sunset Mirrored'.
Charlotte has been a selected a member of NAPA, The National Acrylic Painter's Association, since 2015. In her first year of exhibiting with NAPA she was awarded the Presidents Award for her painting 'Lucky No.7 buoy II' at the NAPA Summer Exhibition, The Crypt gallery, St.Ives.
Next
Previous